SEE THE WHAT’ NEW PAGE FOR CURRENT WORKSHOP EVENTS 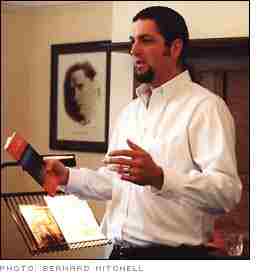 Keith Flynn, in a 2007 interview, said “that true creativity emerges from the subconscious of humans in fits and starts (like a tree springs leaves), and it comes from within, not without. Cocteau called poetry “a religion without hope,” but truth has a protean face, and the beautiful accidents of poetry happen in the dark, alone, where we are not perceived, but received. The poet is unable to stand transfixed before the velocity of Truth for any protracted length of time, and the target is always moving, changing, gaining in weight and mass, until the reality of it makes the true artist succumb or capture it. A poem is an animal big enough to ride, but you can’t pick up that animal at any local pet shelter.”

Flynn, like Paul Valery, believes that a poem is never finished, but abandoned, the poet having poured all he knows into it, and seeing no other possibilities, releases it into the world. “Robert Lowell rewrote his poems until his death,” says Flynn. “All the writers I admire became professional or published or famous by the force of their will upon the words, unwilling to settle for the first thought or effort and committed to the lifelong process of continually sharpening their tools and allowing the idea of gratification to come from surrendering to the process, “the condensory,” Lorine Niedecker called it, the internal drive to make sentences so tight that “a mosquito couldn’t squeak through,” as Berryman pontificated. This is the infernal chase, to make poems where the artifice of labor disappears and the seams dissolve, where the search, not the arrival, is the whole point.

All art is the elimination of the unnecessary. My method is to take copious notes, sometimes dozens of pages or drafts, and compose the poem from the top down. An 18-line poem may have begun as a couple of hundred lines or more, but they are slowly whittled away as the poem reveals its identity. Sometimes several fragments, years apart, may begin to move toward one another and can be judged as family. This way I track the poem through hundreds of ideas word by word.

“Ideas in poetry,” wrote Mallarme, “are what we return to when we leave the music, as one returns to the comfort of a wife, leaving the mistress we desire.” When the poet accepts that nothing he may first create is sacred, his surrender will allow the poem’s true nature to emerge. Compose in a flood, I say, edit in a trickle. It’s hard to be wise and in love at the same time.”

Once, after Jack Nicklaus heard a fan yell, “Lucky!” following a particularly well-placed shot upon the green, he turned to the gallery and said, “The more I practice, the luckier I get.” Keith Flynn’s workshops use innovative strategies to achieve time-honored results; he believes that rhythm is the cornerstone of all great writing, and teaches his students that every poem has its own sonic architecture, and must live in the air.

His teaching has an emphasis on editing and uses exercises to focus on the aspects of language that help create inventive structural ideas, designed to make poems more dynamic and muscular on the page. Flynn delivers his lessons with humor, history, and erudition. He is a “provocateur with a tender heart,” says Kathryn Stripling Byer, NC’s current poet laureate. “(Flynn) possesses the scholar’s respect for tradition and the artist’s hunger for innovation. His world is large and always interesting, and he journeys through it with great elan.”

He brings to his students not only new ideas about literature, but a new understanding of traditional forms, using unexpected connections between music and art, philosophy, and politics, to move the writer further along, in a compositional sense as well as in a spiritual sense. Sociologist Mark A. Schneider defines enchantment as encountering events or objects “so peculiar and so beyond our present understanding as to leave us convinced that were they to be understood, our image of how the world operates would be radically transformed.”

Flynn has always subscribed to the Borges dictum that true poetry “is a combination of algebra and fire,” and that the poet yearns for understanding and consilience in his quarrels with the world, seeking the hidden meanings. “The poet is the priest of the invisible,” says the inimitable Wallace Stevens, “living on the bread of faithful speech.”

From his beloved Blue Ridge Mountains in Western North Carolina, Flynn has traveled the world, sharing his gifts and eagerly assisting other writers on their journey. Twice yearly, he offers intimate two-day workshops and private mentoring sessions inside a historic church building that has held vigil in the Shelton Laurel community just north of Flynn’s home since 1919. For a truly unique experience, join Keith Flynn in the mountains that have formed and inspired him.

Workshops may also be arranged at your location and customized to your needs. Flynn’s book of essays, The Rhythm Method, Razzmatazz and Memory: How to Make Your Poetry Swing, is a wonderful primer for perspective students, and available directly through Writer’s Digest Books, and at bookstores nationwide. “The Rhythm Method, Razzmatazz and Memory is. . .one of the most engaging, soulful, generous, and truly exciting books I ever read. Open it and hang on to your head,” is what Fred Chappell, North Carolina Poet Laureate Emeritus, has to say about it, and Ron Rash, Parris Distinguished Professor of Appalachian Literature, confirms that it is “required reading for veteran as well as novice poets.”